10 Myths you need to stop believing about frozen foods

10 Myths you need to stop believing about frozen foods 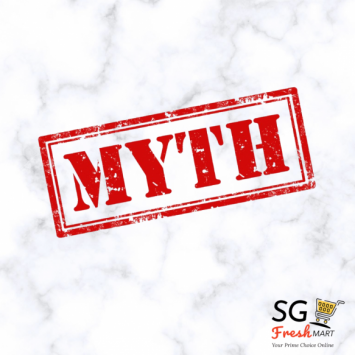 Fresh food isn’t always best or most convenient. Many consumers avoid the frozen aisle. Here are 10 myths that may have been keeping you from eating frozen food, and the truth behind it.

You may only be walking the freezers aisles when you're craving for some ice cream but there are many gems you may have been missing out, both for ready to eat meals and some easy to cook frozen delights! Here are the most common frozen food myths and why you need to stop believing them.

Fresh is best, unless frozen is available. That’s right: frozen food is just as—and in some cases more—nutritious than fresh varieties.

Fresh food is often picked before the fruit or vegetable is ripe, then packaged, shipped, and stocked. The time from harvesting to your plate could be days, even more than a week. During that time, the food loses nutrients. In fact, fresh foods typically lose most of their nutrients—vitamins and minerals in particular—in the three days post picking. Frozen food, however, is harvested at peak ripeness and flash-frozen within hours.

A 2013 University of Georgia study looked at the level of nutrients in fresh and frozen food at the time of purchase and five days later. The day they’re purchased, both frozen and fresh food are nutritionally similar. After five days in the fridge, the fresh had less vitamin A, vitamin C, and folate than the frozen.

Myth #2: All frozen food is high in sodium

You would be forgiven if you assume this is true. After all, a decade or more ago, many frozen foods were not the picture of healthy meals.

Today, however, many food manufacturers are working to meet demands of health-conscious consumers. That means they’re creating lots of low-calorie, low-sodium foods that are filled with vegetables, grains, and lean proteins.

Scan nutrition labels, and you’ll find many sodium totals are near 650 milligrams, a reasonable amount for a frozen meal (well, even home-cooked meals, too). Read the label, too. If you don’t see sodium or sodium chloride on the label, all the salt comes from the food in the meal.

Change your mind about dinner after thawing that pork tenderloin? That’s OK. You likely can refreeze foods you thawed—that is, if you thawed them properly in the first place.

When food sits out in the “danger zone” (40°F - 140°F) for more than two hours, it’s a bacteria bonanza. At this temperature, bacteria grow rapidly. That could leave you sick from any number of bacteria that live and multiply on raw meats, including E. coli and salmonella.

One thing to consider: refreezing sometimes compromises the texture and flavor. It’s not ideal to give your frozen food a second run, but it is safe if you’ve thawed it properly in the first place.

If you’ve been horrified to find frozen corn or strawberries from your high school days in your parents’ freezer, you shouldn’t be. Truly, food can be saved indefinitely as long as it’s stored at 0°F or below the entire time, according to FoodSafety.gov.

However, most people aren’t great at storing foods in the freezer properly, so there is a window of time during which food is at its highest quality. FoodSafety.gov offers a list of Recommended Times for the Refrigerator and Freezer.

You can’t freeze whole eggs—that’s true. The shell will likely crack as the egg expands during the freezing process. That will leave you with quite the mess when it thaws.

But you can freeze eggs. If you purchased too many or your backyard hen was too prolific for your family’s appetite, crack the eggs, and beat the yolk and whites together. Then you can freeze them for future use.

Did you need egg yolks for a sauce but want to save the white for another time? You can freeze them easily. But if you’re left with yolks after an angel food cake, you have a smaller window of time. Egg yolks don’t freeze well. The texture never quite returns to normal, though it is perfectly safe if you decide to do it anyway.

Is a potato or two cheaper than a package of frozen mashed potatoes or French fries? Likely. There is a markup for the prep and freezing process. But frozen foods can be a budget-savvy way to eat healthy foods or quick dinners without forking out big bucks for out-of-season produce or restaurants meals.

In winter, frozen fruit is likely cheaper than fresh, pound for pound. The same is true for winter squashes in summer. Plus, as mentioned before, they’re likely much healthier because they’re flash-frozen, in season, just hours after they’re picked.

Packaged frozen dinners are often much healthier and much cheaper than takeout or delivery. Save yourself the dollars and the calories (and possibly fat and sodium), and stock up on family-favorite freezer meals for nights when dinner is just too difficult.

Bacteria is most active between 40°F and 140°F, but it doesn’t die below 40°F. Instead, it becomes inactive. The colder temps don’t eliminate the risk of any bacteria that might have been present when you popped the food in the freezer.

Food safety issues still apply when you’re packing foods for the freezer. Wash your hands, use clean surfaces, and try not to cross-contaminate between surfaces to keep your foods safe now and for the future.

Keep foods safe from bacterial growth when you thaw them, too, by defrosting them in the fridge, not on the counter or sink.

Once upon a time, this might have been very true. Today, however, you can find healthy choices that are minimally processed and close to their natural state hiding out in the frozen section.

Read food labels before you purchase. Look for any unnecessary preservatives or additives, and put it back if you find them. Enough natural foods companies have innovated ways to freeze their foods without those unnecessary ingredients—freezing is itself a preservation technique—so you can find healthy, minimally-processed foods if you look.

“Sell by” and “use by” aren’t on/off switches for your foods. They don’t turn bad like a pumpkin at the stroke of midnight.

Instead, they’re dates that let grocery store stockers know it’s time to rotate their inventory—or mark it down for quick sell. If your food reaches either of these dates before you’ve had a chance to eat it, you can freeze it.

Of course, the “sell by” date often means the food will be at its best quality then. Freezing it at this later point may reduce the quality, but it’s still perfectly safe to freeze it now and eat it later. Just be sure to package it properly for the best storage.

Myth #10: Packaged foods can go straight into the freezer

Most foods you buy at the grocery store are meant for fresh consumption, not frozen storage. If you plan to put them into your freezer for later, you need to prepare them with proper storage techniques.

Instead, unpackage and rewrap everything you plan to freeze in freezer-safe bags or wraps. Get as much air out of the package as possible before you put it into the freezer—air is the enemy in the long, cold storage.

If you’re freezing vegetables, you need to add an extra step to the process: blanch the plant foods before you freeze them. Be sure to thoroughly dry them as well. Water on the skin of a vegetable invites bacteria, freezer burn, and sogginess when it thaws. Go ahead and wash fruit before freezing, too. The fruit may be too soft to wash when it thaws, so you want to know it’s clean before you eat it.